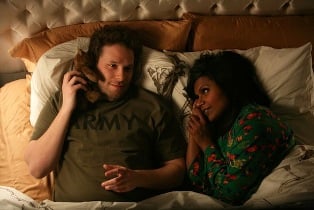 An upcoming episode of The Mindy Project will feature Seth Rogen as the latest in a long line of famous guest stars to play the love interest of Dr. Mindy Lahiri. Other famous guest stars who have appeared on the show include Ed Helms, B.J. Novak, and Seth Meyers. Rogen will be playing Mindy Kaling’s summer camp crush on an upcoming episode of her Fox comedy The Mindy Project, according to media reports.