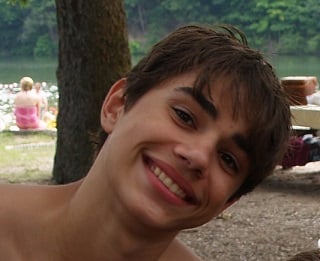 Gabe Jaffe was a camper st SMA Teen Summer camp for the summers of 2010, 2011, 2012 and 2013.  Gabe grew and matured during his time at SMA and when he aged out of SMA we were sad to see him go.  Gabe's older brother Dan Jaffe was also a camper at SMA in 2003, 2004 and 2005.  Gabe recently wrote the following essay as a part of his application for the university of Maryland.  In this essay Gabe had to answer the question:

Describe a time when you were a fearless leader.

Stone Mountain Adventures Teen Summer Camp (SMA), my close-knit overnight camp in rural Pennsylvania, had given me unparalleled experiences, life-long friends, and the best four summers of my life.  Sadly, because I was 15, this would be my last year at camp; the culmination of the session would be the dance and as a veteran camper, I would help organize it.