Are you thinking about a summer camp for your child for 2012?

END_OF_DOCUMENT_TOKEN_TO_BE_REPLACED

I had a trip down memory lane on Saturday when Sherri Comerford (previously Umanski) stopped by the SMA booth at the White Flint Mall Camp Fair with her 5 year old daughter Eva. Sherri and I were campers together when camp was still called Horsepower Adventures way back in 1984, 1985 and 1986! We had some fun playing “remember when…” and she was surprised to see how much everything at camp looks the same. Sherri said that when her daughter Eva is old enough there’s a great chance she’ll be a camper at SMA. So we signed up our first camper for Summer 2019, Eva Comerford!

END_OF_DOCUMENT_TOKEN_TO_BE_REPLACED

I had an awesome weekend in the DC area this weekend at a camp fair at the White Flint Mall in the Bethesda, MD.  I met with many of perspective new families and got a lot of people excited about Stone Mountain Adventures.  The highlight of the weekend was meeting up with some SMA Veteran Campers at the fair who spent some time sharing memories and a few laughs.  Current SMA Campers who stopped by our booth and spent some time include Nick Walden (SMA ’09, ’10, ‘11), “Becca Blue” Lewis (SMA4, ‘11) and Ben Gross (SMA2 ’10, ’11).

END_OF_DOCUMENT_TOKEN_TO_BE_REPLACED 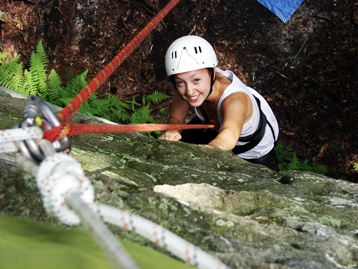 Today I uploaded a new Rock Climbing Summer Camp Video to our web site! This video feature footage of climging mostly at the Huntingdon Cliffs Climbing area.  The climbing instructor in this video is Thatcher Houldin who is the younger brother of camp director Jud Millar.