I first met Brenton when he was an undergrad college student at Juniata College in Huntingdon,

PA. At the time we was a player on the Juniata College Men's Rugby Team and I was a volunteer coach.  I remember Brenton as an enthusiastic player with a decent knowledge of the game  of rugby.  He was also an excellent teammate who would go on to the the captain of his team and the president of the rugby club.  Both very important roles which require a lot organizational skills, time management and leadership.

My relationship with Brenton took the next step when he applied to be a counselor at SMA Teen Summer Camps. Teen Summer Camps.  We worked together for 2 amazing summers at SMA Teen Summer Camp and his enthusiasm for life and all things SMA was contagious for other staff and campers.  One memory in particular sticks out when we were getting dressed up to go "Disco Bowling" and he arrived at evening meeting with an amazingly unique costume.  That insiped so many other people to dress up, it was awesome.

In this article Brenton talks about his experience as an adopted child from Korea growing up in state College:   “Being adopted has been a factor in all of my experiences growing up, in how people saw me and interacted with me and how I thought of myself.” At age 27, he traveled to Korea to learn more about his origins. “That was the beginning of my adult life.” He suddenly knew what it was like to walk without being noticed and fit in without any effort.

Brenton went on to comment further on this experience: “It changed things for me,” he says, and shaped his understanding of what it means to find a place in the world. This experience, and his reflection on it, is part of what has made him a great fit for World in Conversation.

Brenton is currently enrolled in a masters program in counselor education at Penn State University. 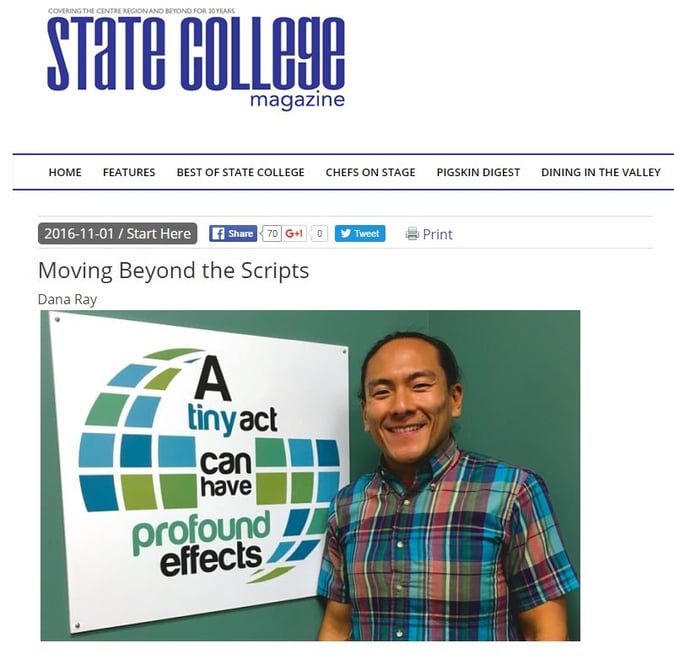