The past two winters in central PA were epic with near record snowfalls and cold temperatures... this winter not so much.  Even with minimal snow and unseasonably warm tempatures Fat Bike riders from around the Keystone Stage and the Northeast will descend on central PA this weekend for the 6th Annual FrozenFat Mountain Biking Festival!

The following artice written by April Feagley appeared in the January, 15 2016 issue of the Daily News.

"Fat bike enthusiasts from throughout the state and the northeast will converge in the area this weekend for the sixth annual FrozenFat event.

“It’s a little bit of a different format this year — more of a big, fun group ride than a race as it has been in the past,” said Evan Gross of Rothrock Outfitters,

Penn Street, Huntingdon. “We should have somewhere in the neighborhood of 50-60 participants.”

Fat bikes are versatile bikes designed for use on rougher terrain, where street or even mountain bikes would falter. They were originally invented for both winter trail riding and racing in Alaska and desert riding in New Mexico. To equip the bikes for stability in snow, ice or rough terrain, they sport 3.8- to 5-inch tires. 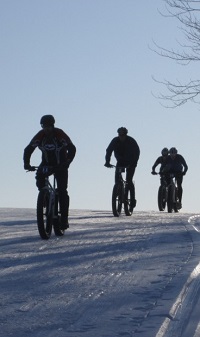 “In just five or six years, fat biking has gone from a superfringe sport to having big ski resorts open up lines and lifts for fat biking routes,” Gross said. “Seven Springs (Mountain Resort in Somerset County) is planning to open one up. With a winter like this one, there hasn’t been a lot of skiing, but with fat bikes you can still get out and have limited impact on the slopes.”

The FrozenFat weekend was named as one of the top 10 winter activities to enjoy in Pennsylvania by Visitpa.com, the official tourism website of Pennsylvania.

“Events like FrozenFat are great for us,” said Huntingdon County Visitors Bureau executive director Matt Price. “Even with a relatively small number of attendees when compared to a summer festival, this event attracts a niche of outdoor and biking enthusiasts that, as it grows will help balance out the seasonality of visitor interest in the area.”

Winter events such as the biking weekend also bolster local tourism during the typical winter lull.

“January through March is always the slowest quarter for visitation to Huntingdon County,” Price said. “At our altitude and latitude, attracting something like a ski resort would be nearly impossible due to inconsistent freezing temperatures. However, there are a lot of winter outdoor pastimes and sports that aren’t dependent on snow.

Events like Frozen Fat that showcase outdoor recreation in the winter are helping to build the area’s reputation as a fourseason destination.”

Price encouraged local residents to support this event and others. 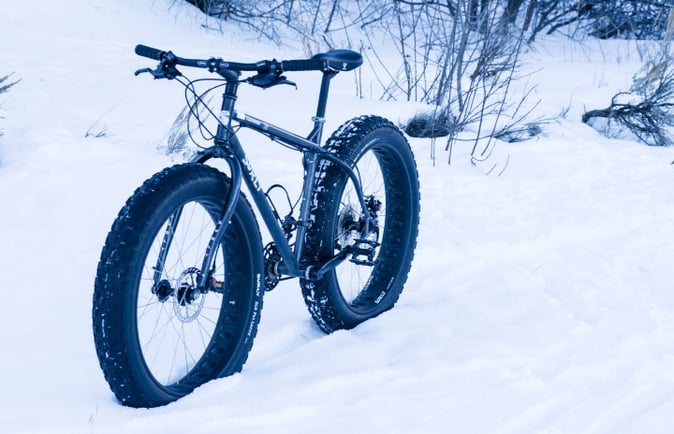 “Bicycling events are great for this because their attendees carry their bikes on racks visible to everyone,” he said. “When you see someone getting gas, or stopping for groceries with a bike on top of their car, ask them where they are from, give them directions if they need them and thank them for visiting if they are from outside the area.”

Riders will arrive in Huntingdon today and the route will begin tomorrow morning at Greenwood Furnace State Park.

“We’ll load bikes and riders onto shuttles and take them over to Alan Seeger,” Gross said. “They’ll start riding from Alan Seeger and then end up over in Cooper’s Gap and ride back over to Greenwood Furnace. It’s about 25 miles. Then, there is an optional 11-mile return ride on Turkey Hill Road back toMartin Gap.”

Rothrock Outfitters will also have a checkpoint set up at Pavilion No. 1 at Greenwood Furnace State Park Saturday afternoon which will coincide with the park’s Snowfest celebration. Fat bike enthusiasts will be on hand to offer demonstrations and allow visitors to try the bikes out for themselves.

Gross said the FrozenFat participants will spend Sunday as a just a fun day to get out and ride.

“Everyone just goes out to Alligrippis,” he said. “We meet at the shop for a light breakfast and everyone drives out to Raystown to ride the trails. It’s just a celebration of fat bikes.”

Stone Mountain Adventures is a Teen Mountain Biking Summer Camp in PA with a specialized program called the Mountain Bike Masters Program.  The SMA Mountain Bike Masters Program is ideal for campers who are passionate about mountain biking excited about the opportunity to ride world class trails on a daily basis.  Campers in the program ride every morning on single track trails at Raystown Lake called the Allegrippis Trail System.  They were described in a Dirtrag Magazine article as "Thirty-three miles of buttery smooth single-track bliss".  Our knowledgeable and enthusiastic staff are excited to ride every day and help campers hone their riding skills and confidence.  The MOUNTAIN BIKE MASTERS PROGRAM is limited to eight campers. Campers not enrolled in the Mt Bike Masters Program will get ample time to mountain bike during their time at SMA.  SMA is a Mountain Biking Summer Camp.