It has been 141 days since Dirtfest 2014 came to a close at Raystown Lake.  This also means that is has been about four and a half months since Stone Mountain Adventures Teen Summer Camp hosted the Kids and Teen Ride on the Sunday morning of Dirtfest. For those of you not in the know – Dirtfest is a Mountain Biking Festival that takes place in central PA at Raystown Lake on the Allegrippis Trail System.  Dirtfest is organized by Dirtrag Magazine based in Pittsburg, PA, in coordination with our friends Rothrock Outfitters in Huntingdon, PA.  Often described as a “Celebration of Mountain Biking Culture,” Dirtfest offers riders who are passionate about riding single track the chance to demo incredible mountain bikes from the world’s top brands, camp at Raystown Lake’s Susquehannock Campground and come together to ride the awesome Allegrippis Trail System!  Dirtfest 2014 had about 1500 riders!

It was a rainy week leading up to Dirtfest this year. Even though our trails usually drain extremely well the rain made for muddy trails and even muddier riders.  As mountain bikers from all across the northeast and mid-Atlantic packed their cars and SUV’s and started their journey to central PA the final preparations were being made here as well.  I arrived at Dirtfest around 4pm on Friday afternoon and set up the SMA Summer Camp for Teenagers booth for the weekend.

Saturday is the only full day of Dirtfest as most folks travel on Friday and Sunday.  As a result, I recruited some current and former SMA Teen Camp Counselors to help staff the tent.  Our staff included Tim Bailey, Molly Kampmann, Jason Criswell, Patrick McManamon, and even Kiwi Craig Fahey was here from New Zealand!  The job of the dedicated folks who worked as a team to staff the booth all day was to:

3)      Sign riders up for the Kids and Teen Ride to take place on Sunday morning at 10am hosted by SMA Teen Mountain Biking Summer Camp!

By Saturday evening it was clear that our awesome staff team had been successful in all three endeavors as they had given out over 60 brochures, demoed Santa Cruz and Pivot bikes, ridden a combined 40+ miles of trail and signed up 12 eager kids and teens for the Sunday morning ride! 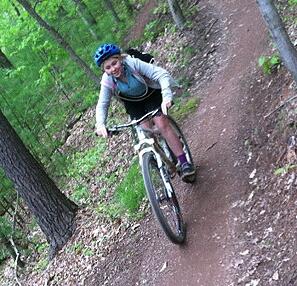 Sunday morning brought sunshine and blue skies.  There was anticipation in the air as Craig, Anne, Biff, Wyatt, Molly and I packed our rig with bikes, helmets and coolers full of snacks and departed for the trails.  When we arrived at Dirtfest Sunday morning there was a buzz of excitement from vendors opening up their booths, riders already returning from early morning rides and the late risers sipping their second cup of coffee.  I was excited to see families already gathering at the SMA tent preparing for the ride.  As departure time grew near we had a confirmed 12 riders joined by myself (SMA Director Jud Millar), Craig Fahey, Tim Bailey, Molly Kampmann and a number of parents as well.  Once it was confirmed that everyone had a working bike with brakes tested, a fitted helmet and signed a waiver we boarded the Dirtfest shuttle bus and loaded our bikes in the trailer and traveled up the Susquehannock Road to the “top” of the trail system.

From there we rode the following trails stopping at each trail intersection to regroup and check in with everyone:

Buck and Fawn trails are “green” trails which allowed our riders the chance to get comfortable on the trails.  When we dropped into Osprey our speed picked up. As we flowed over rollers and around banked turns we were careful to keep our speed in check while experiencing the thrill of gravity fed mountain biking trails!

We encountered many other riders on the trails (there were 1500 riders at Dirtfest after all) but all of the trails are one way so mostly we saw them at trail intersections when we were regrouping.  “Bumping” into other riders on the trails is always a highlight of the weekend for me as there are often “high fives” along with a few squeals of joy as riders of all shapes and sizes celebrate the joy of mountain biking!

At the end of the Osprey Trail we stopped and regrouped at a huge meeting spot and there were already 15 other people there.  Add to that about 20 that were in our group and we had ourselves a regular old party!  It was so great to see so many smiling faces all so excited about the feeling of joy and freedom of riding bikes!

Once we all arrived and had a good laugh we continued on the Hydro Loop.  We traveled clockwise on the trail and it was so awesome to see kids and teens flowing over the buttery smooth single track that is the Hydro Loop.

At about the halfway point of the Hydro Loop there is a spot where the trail dips down close to the water and you can see the pristine blue-green waters of Raystown Lake.  This, as it turns out, was our final destination on bikes. Waiting for us at the water’s edge just off the Hydro Loop Trail was a houseboat provided by Seven Points Marina!  On the houseboat were incredible volunteers from Rothrock Outfitters and the Raystown Mountain Biking Association (RMBA) as well as Biff, Anne, Wyatt and Molly.

I had told our riders in the beginning that they were meeting a houseboat at the end of the ride. As the SMA staff, kid and teen riders arrived they were all wide-eyed that there really was a boat there to meet them. Everyone passed bikes up onto the roof of the boat and boarded the houseboat. The riders were fulfilled from their trip and excited to travel by boat back to the Dirtfest Expo area!

As the boat set off on the voyage back to Susquehannock Campground and the Dirtfest Expo area riders enjoyed a meal from Brandon and our friends at Doan’s Bones BBQ.  Once the meal was finished and we were on the open waters of Raystown Lake there was a “Q & A” session about what life is like at Stone Mountain Adventures Teen Summer Camp.  Molly and Tim, former campers and now current SMA Camp Counselors, gave full testimonials  about how much fun it is to be a camper at SMA. They really emphasized the value of a small summer camp and how it’s super easy to be a First Time Camper at SMA! 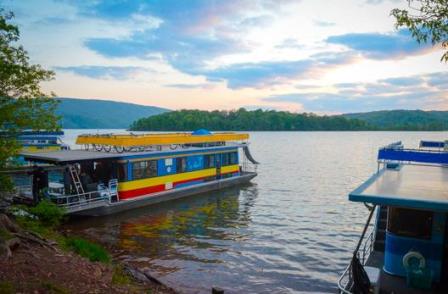 Once the houseboat made it back to Susquehannock Campground we shuttled back to the Expo Area and the SMA Booth.  We said our final goodbyes to our riders and encouraged them to return to Dirtfest next May.  There were several who expressed interest in learning more about SMA Mountain Biking Teen Summer Camp and that they looked forward to seeing photos from the ride.  So that’s where this SMA Bog Post comes full circle... 141 days later!

Special thanks to everyone who made the 2014 Dirtfest Kids and Teen Ride such a success including: