Hanging around in a Hammock at SMA Teen Summer Camp

There are activities at SMA Teen Camp to "Go Fast":

SMA is an "Adventure Camp", thus the name Stone Mountain Adventures.  There are times when the thrill seekers at SMA Teen Summer Camp thrive on the adrenaline rush of our adventure activities including:

There are activities at SMA Teen Camp that slow down just a little:

about being active and having outdoor experiences with friends new and old.  I believe part of Sir Issac Newton's First Law of Motion applies here "An object in motion stays in motion with the same speed and direction unless acted upon by an unbalanced force."  In this case the "Object in motion" refers to our campers and staff who relish our slightly more mellow activities including:

Then there is the well earned "chill time":

Then there are times during camp when it's important to slow down and enjoy the moments of life. These can feel like magical times at camp because you have earned your rest.   Some say this time of rest and reflection is just as important s your times of motion and action.  Others say that taking time to rest and reflect after an adventure of any kind helps to give meaning to that experience.

Hanging Around in a Hammock

At Stone Mountain Adventures one of our favorite was to have some Rest & Relaxation is Hanging Around in a Hammock.  Hammocks have always been a part of the SMA Rock Climbing Summer Camp Culture, however   there has been a resurgence in the past 5 years or so.  The art of hanging multiple hammocks has become a challenge at camp and on camping overnights.  This is where the second part of Sir Issac's News Fist Law of Motion Applies: "An object at rest stays at rest unless acted upon by an unbalanced force"  The force in this case is the next activity you signed up for: Mountain Biking at the Allegrippis Trails at Raystown Lake anyone? 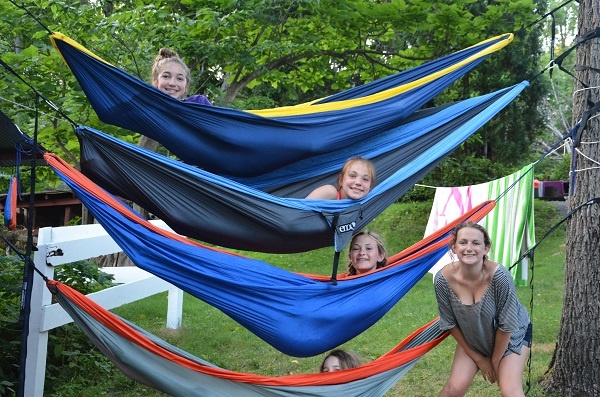